Bert received a wonderful report from the vet.  His wound under his wing is almost completely healed.  She was just amazed at how much it healed. His tail area has a lot of black dead skin which may fall off on its own and he does seem to have a small nub of a preening gland still on his tail!

He got the go ahead to go in with the other chickens so when we got home I opened the electric fence and let everyone run around free.  Bert was sure happy to be back with the ladies and quickly got back to preforming his reproductive duties.  He tried real hard to catch Princess Diana, but she was not having anything to do with it and kept running away.  Joe stayed clear of Bert and only once when he was in Bert's way he got pecked.

Saturday everyone stayed locked up cause it was so rainy.  Sunday about 2:00 the rain was done so I let everyone out to run around.  They all had a great day going all over the yard eating and scratching.  Joe finally figured out (from watching Bert) how to climb on top of the ladies, but every time he did Bert came in charging, knocked him off and chased him all over the place!  Joe still tried to do this a few times that I saw.

That night when I went to check on everyone, Bert was on the roost in the big coop with everyone but Joe and Princess Diana were back in the nest boxes.  I grabbed Joe and put him on the roost.  He is usually perched on the edge of the nest box and easy to see, Diana sometimes is inside the nest box and hidden in the dark.  I reached in each nest box and came up empty!  Where was she? I looked under the roost and nothing there. Oh crap, I thought she got left outside somehow and is hiding someplace.  Then I thought maybe she went to her old coop in the Corn Crib Carport.  Sure enough she was in there all by herself!  I took her back to the big coop and now everyone is in one coop together. 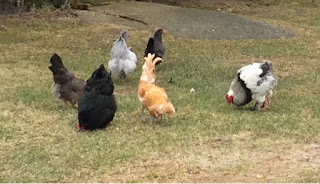 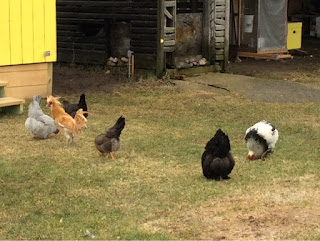