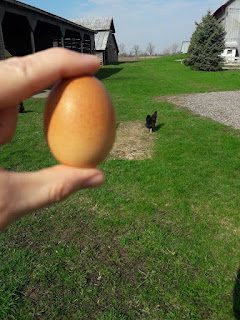 How do I know it was her?  Well it was laid in one of the upper nest boxes.  The other girls don't use the top ones at all. Princess Diana likes to roost there at night and I have to move her each night to the roost bar with the others. And it is a dark brown coloring, at least on the top, that her breed is known for. 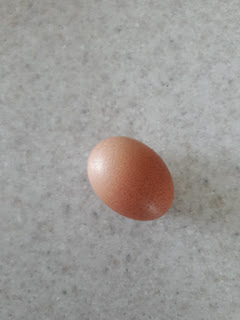 She has been a very good layer.  She is still trying to work out the coloring of the eggs, but that is one of the last things done before it gets laid.

She has an injury on her head.  Tuesday when I came home from work, Laverne and Bert were outside the fence.  They must have flew over for some reason.  That left Princess Diana in the coop area with Queen Ann and Lucille, both can be pretty aggressive towards her.  Bert usually steps in between them but if he was out most of the day.  I noticed she was missing some feather on the back of her head and I could see some blood.  So that night I took her in the house to look at it.  There was a flap of skin that was almost ripped off.  I put some medicine on it and she seems to have healed nicely.
I wonder if Bert could have caused it too.  He can be pretty aggressive with pulling on the feathers on the back of their heads when he his mounted on them.

Everyone is doing fine now.
Posted by Bobbi Buller at 1:53 PM