We had crazy warm weather last weekend, so I was able to get the electric fence put up. 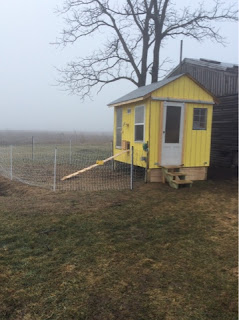 The ground is still too frozen for me to dig a trench along the front of the coop to put up the hardware cloth. I put up a temporary board along the front.  I did have to drive a 6 foot steel post to ground the fence.  That was not fun!  I ran into frozen sand so I defrosted it with some boiling water (thanks for the suggestion,  Mom) and was able to drive it into the ground 5 feet deep. A couple of the fence post also ran into some frozen ground but I just pounded a metal stake in the ground to make room for the post spikes.

I was very proud that I figured out how to electrify the fence and I didn't kill myself! I did get zapped a couple times, but I knew that was going to happen.  I know it works!  It will be interesting to see how the fence holds up when the snow comes back.

Opossum
WARNING: The following story contains violence that may not be suited for some readers.

Let me tell you about our opossum visitor.  Around Christmas I saw a opossum in the front yard under the bird feeder. I got the snow shovel and scooted/shooed him away.  Later I thought that was kind of dump, he is just going to come back and he is a predator of chickens.  They really like to break into coops and eat the eggs but they also enjoy snacking on chickens.
So the next time I saw him under the bird feeder I went the garage to get the sledge hammer, but it was on the other side of the garage and I had to open the large garage door to get to it and by the time I got back around to the front of the house he was gone.  I put the sledge hammer by the side entrance so it was easily accessible.
Two weekends ago I was filling a bucket of water in the kitchen and the four older chickens were free ranging over by the bird feeder in the backyard.  As I looked out the window at the chickens I saw the opossum walking straight towards the chickens. I jumped into my boots and ran out the door, Jim was right behind me but didn't know what I was running outside for. I went to the garage and the sledge hammer was not where I had left it last time. I yelled at Jim, "The sledge hammer is supposed to be right here!".  I grabbed the metal shovel that was right there and ran out to the opossum.  I screamed at it and slammed the shovel down onto it several, several times.  When I was done it's head was flattened pretty good but it was still twitching, so Jim went inside to get his handgun, but by the time he got back it was not moving anymore.
When Jim and I discussed it later, he suggested next time I just tell him to get his gun to take care of it more humanely.  I know that opossums don't move very fast but it was pretty close to the chickens and by the time Jim would have gotten his gun it might have been long gone or hurt or killed one of the chickens.  At least I know a shovel will do the job but I still think the sledge hammer would have done it quicker!  Later I wondered if the opossum was really coming to eat the chickens or just going to the bird feeder to look for a snack like he had done in the past? Oh well, I'm still proud of myself for protecting my flock!
So that is my exciting story about bludgeoning a opossum to death.

Chickens
The young group is coming along great.  It took some time but I got them to roost inside the coop at night, instead of huddling together on the ground in the run area. I open the door to the run on the weekends but they do not adventure past a couple feet from the door.  Its cold and there are no bugs or grass to really entice them to run around the yard.
Even the older group does not like to go outside very often.  The older group was loving the sun and warm weather we had this past weekend.  They were dust bathing in the sand and soaking up the sunshine. 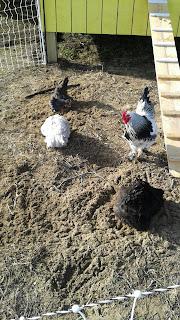 I had to chase Bert away from the chicken tractor a couple times.  He actually went into the run area, all of the young group was in the coop part, and I stepped in behind him and you could see the look in his eyes saying "OH shit, how do I get out of here?" Well I didn't let him off easy.  I grabbed him and walked around with him for a few minutes petting him and talking to him.  We will have to see if he tries that again!  But I'm gonna have to keep a watch on him when I do let them out of the fenced in area because those other girls are too young to deal with him trying to mate with them.  He's almost 3 times their size!
The cabbage pinata has been a big hit.  They have it devoured in 2-3 days.
I need to think of someway to make it visible from the house when the automatic coop door is closed.  I was thinking of a white or bright sticker that might show up well in the dark.  Any suggestions?
Posted by Bobbi Buller at 9:00 AM