The Babies are here

Get ready for lots of chick pics and videos!  The baby chickens have arrived. 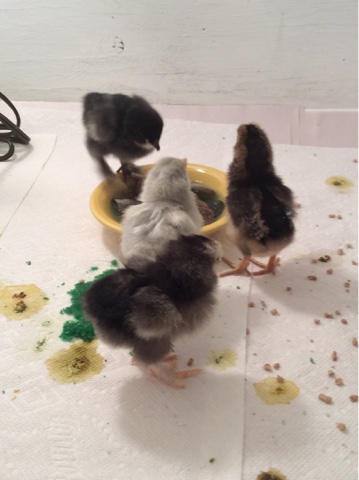 What an adventure they have had!  I received my email notification that they shipped on Monday and were scheduled to arrive on Tuesday. Now when I ordered them they informed me that they ship on Monday and arrive either Tuesday,Wednesday or Thursday.  They tell you not to contact them unless you don't receive them by Thursday.  So I took Tuesday, Wednesday and Thursday off, just in case.  I could always cancel the time off and go into work.
The previous Saturday I did my do diligence and went to the local post office to let them know I was expecting some chicks to come in the mail.  The postal clerk said they usually call around 7am to let you know the chicks have arrived.  So Tuesday morning I got ready for work, just in case, and waited until 7:30, then I called the post office and asked if my chicks had arrived.  The clerk said "I hear some little ones, let's check who they are for" I could hear a lot of peeping through the phone as she looked through the packages ( they must have had a few) but none where for me.  The clerk said they might come on the noon truck and she took down my info.  I decided I would just take my vacation day in case they come later.  At 1pm I called and got the same clerk on the phone and she told me they did not come.  My tracking online only stated that they left Ohio at 4:30 Monday afternoon.  Well I was sad.
I left my cell phone on that night in case they called real early (I usually turn it off every night) and I got a text at 2 or 3 in the morning, stating that my package had arrived in Detroit at 6:30pm.  Talk about a time delay!  What the hell where they doing in Detroit?  Of course I had a hard time getting back to sleep, thinking my poor babies were going to arrive dead!
At 7am this morning (Wednesday) I called the post office and spoke to a different clerk and no chicks had come in.  So I told them I would call back after the noon truck came in.
Then at 8:40 I got a text update on my tracking saying they arrived in Greenville, Mi at 6:33am!  How did they get over there?  So I quickly looked up the Greenville post office phone number and called them and said I got an update saying my chicks were there. The clerk said "yes they were and you are in Ionia." Yes I am," I replied.  She stated they sent them over on a truck that would be going by Ionia. I thanked her and rang off.  I had not made two steps from the phone and it rang, it was the Ionia post office letting me know they had my chicks. So I raced there and got them.  I could hear  several different peeps but could not tell how many, so ther was still a chance one didn't make it but when I opened them up all four where alive and well!
I'm glad the post office screw-up didn't cost them there lives.  On the top of the box it had a printed tag for the Grand Rapids postal area and someone wrote over it to change it to the Detroit area. Jerks! 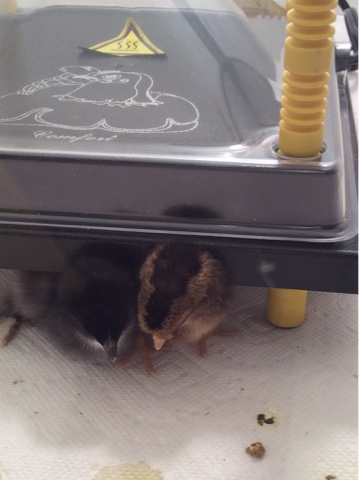 They were very excited and did not take to the nipple waterer right away so I gathered some stones out of the driveway and put them in a shallow dish with some water.  I dipped each beak in the water and they all started drinking.  Then they all huddled together and where chirping very loudly so I gentle pushed them each under the heat plate.  After a while they started coming out to peck at some food and drink more water. 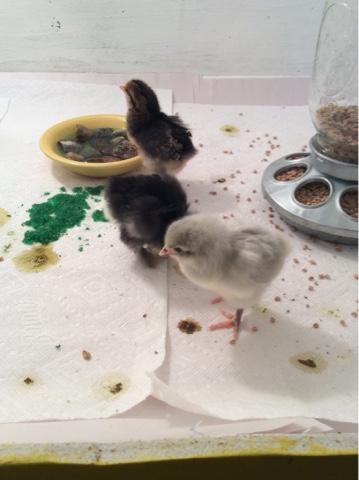 The are so fun to watch.  I keep picking them up so they will be used to being handled.  After a couple days I will start using pine shavings for their bedding.  I just wanted to give their little legs a chance to strengthen. 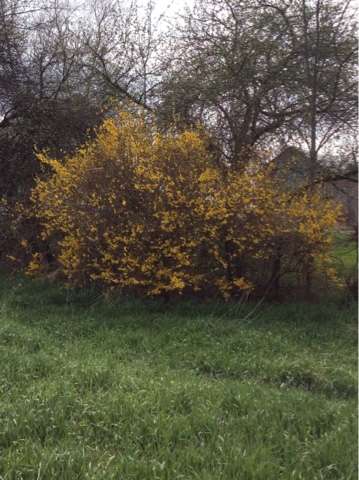