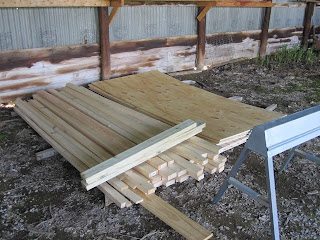 It started with a pile of lumber! 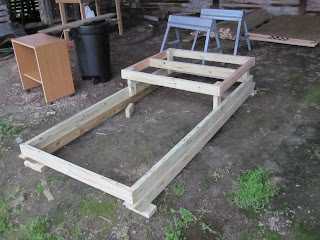 I have no building skills, I got the plans for this from Building Chicken Coops for Dummies. 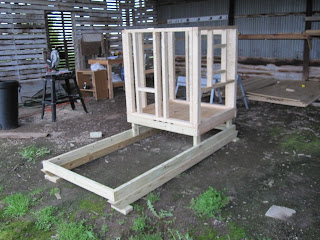 A chicken tractor is a movable coop.  You move it around the yard so the chickens don't have time to decimate the grass before it can grow back. 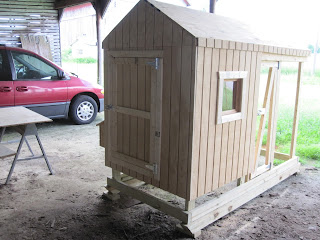 In the book this coop is called the All in one because it has the coop and run together.  Its about 8'x3 1/2'.  The coop is raised to keep varments from getting in through the bottom and it gives the chickens more grass area to peck at. 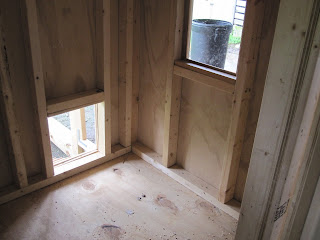 I added two roost boards later. There is a window on each side. I also put a outdoor thermometer on the inside so I can see how hot it is inside the coop. The roof area between the coop and run is open so I put hardware cloth over it for ventilation. 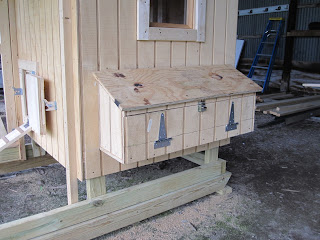 The plans for the coop had the nest box area inside and a door flush with the wall to access the eggs.  I thought that gave the chickens even less area inside, so I built it outside the coop. 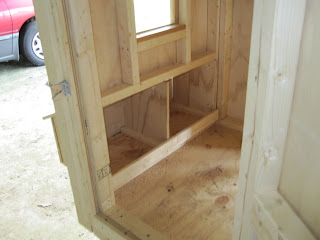 Inside the coop its all about space.  You want to have 3-4 square feet per bird.  Chickens are very social animals and like to be around each other, but they do need space so they are not crowded.  If they are stressed they will peck at each other and it could lead to someone being killed.  Just imagine being in a elevator with 3 other people, you get the idea! 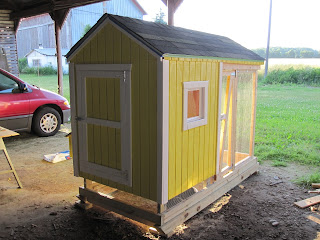 I tell you painting is the worse!! After I started painting with a brush I switched to a small roller, then I realized I should have just used the roller on the raised wide areas and left the groves plain.  But I had already started painting inside the groves so I had to do the whole thing that way.  But it got done! 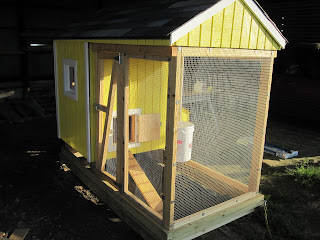 The bucket is for water, it has 4 water nipples on the bottom.  I ordered a larger feeding bucket for the run area too. 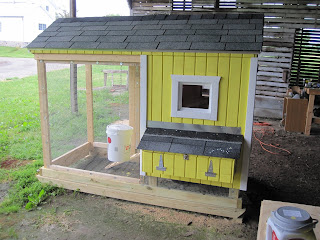 I did close off the nest box area inside.  They won't be laying for several months and it would just get dirty inside.  You want the nest area to be clean as possible to keep the eggs clean.  I hope to have the larger permanent coop built before they start laying. 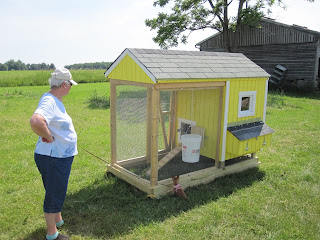 They got introduced to their new home last Saturday.  Mom and Rosebud were waiting for them to venture down the ramp for the first time. 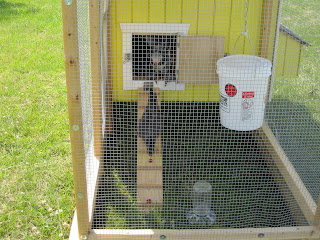 They had to be enticed to come out into the run with strawberries! We ended up having to use the truck to pull it out into the yard.  The tractor kept getting stuck and spinning its wheels!  It is quite heavy.  They took to the new water bucket right away after I tapped on it to show them that water came out.  The new feeder did arrive in the post that afternoon and that did take some time for them to get used to.
Overall I am pleased with how it turned out.